Life
From Mekkes was a high ranking officer in army. In he studied at the Advanced Military Academy in The Hague before becoming an adjutant to the commander of the field army (1933-1940). After studying law at the Roman Catholic University in Nijmegen, he received his doctor's degree under Dooyeweerd in 1940, which elaborates Dooyeweerd’s approach to the humanistic theory of the [1] From 1942-1945 he was imprisoned by Nazis in POW camp. There he introduced the thought of Herman Dooyeweerd to Hans Rookmaaker giving him a copy of De Wijsbegeerte der Wetsidee to study.

From he worked for Dutch equivalent of the FBI. In 1947 Mekkes was one of the first four philosophers (the others being K.J. Popma, S.U. Zuidema and van Riessen) to be appointed by the Association for Philosophy to a philosophy chair at different state universities. Of Mekkes work at the time Bernard Zylstra writes "After his appointment at Leiden and Rotterdam, Mekkes published regularly but not extensively, directing his penetrating analysis to the fabric of western culture and its cohesive force, reason" (Contours of a Christian Philosophy p.24)

Thought
is often described as having been one of Dooyeweerd's most faithful defenders, but also as having developed a unique style and approach which in some way could be seen as having a critical relation to Dooyeweerd's thought. His article 'Wet en subject in de der Wijsbegeerte' (1962) reviewed the criticisms of Dooyeweerd made by Conradie, Brummer, and Van Peursen and defends him on the concentration point, supra-temporality, and his transcendental critique. Mekkes came to certain themes in a way that moved beyond Dooyeweerd’s articulation of his philosophy. questioned whether it was correct to view the heart or religion as outside of time. He came to view the search for an Archimedean point beyond time from which a universal point of view may be obtained as too close to the neo-Kantian method (Mekkes 1973, 15). Such a method underplays the temporal activity of theoretical thinking and transforms it into a transhistorical point of view. Key to this criticism was Mekkes developing notion of cosmic time which also led him to suggest that Dooyeweerd had wrongly interpreted the order of creation as a static structure functioning as a framework for cultural development (Mekkes 1973, 68). He claimed that "Talk about 'creational orderings' as something in itself is … impossible" and so spoke instead of ‘structures under the rainbow’.

While being cautious about how reformational philosophy should understand the law-idea, he held on to the importance of its basic of opposing the dominant delusion of “autonomous” thought. The law-idea keeps the sense of non-arbitrariness of reality whereby being human is bound to an ordering that both precedes and succeeds its activities. Reformational philosophy in “rejecting every autonomy … follows the structures in the search for their meaning, a search not by the light of intellect, but with understanding under the light of integral truth through faith” (1973:61). Hendrik Hart interprets this theme as “a continued following of the disclosures of meaning which progressively becomes manifest in the experienced embodiment of the love of the crucified Lord. That is to say: in our embodied following, dimensions of God’s redemptive intent may on the one hand struggle to become manifest, while on the other hand they may remain hidden in a rigidly maintained earlier established order. Such following, for , is a temporal motion which requires a continuity of reformation that cannot be given a priori boundaries. The order of reality must itself be reoriented to the manifestation of love in the cross, must itself be a developing order.” [2]

Some from Mekkes’ Dutch works
"It is for the covering up of ground motives, not for their content, that a philosopher must reproach his humanistic opponents." (1961:35)

"Right from the beginning reformational philosophy emphasized the dynamic character of creation as being God's first revelation to the creature. That's why it spoke of the ground-motive of creation." (1973:58f)

“Rejecting every autonomy, she follows the structures in the search for their meaning, a search not by the light of intellect, but with understanding under the light of integral truth through faith” (1973:61)

[2] “Notes on Dooyeweerd, Reason, and Order” in Contemporary Reflections on the Philosophy of Herman Dooyeweerd Edited by Strauss and Botting p.135
[3] “The Dutch Calvinist philosopher, J. P. A. , made me especially aware of the closed, autonomous world and life view that was and is still present in the positivistic, so-called value-free mainstream of economics”
[4] "The philosophizing of was a constant inspiration to me as I worked on the philosophical elaboration of the central themes that are indispensable to reflection on technological development." See Technology and the Future, p. 403, note 5

A full bibliography by A. M Pedersen and L. Derksen (Uitgave Filosofosch Institut VU, 1977) is available here. [pdf - off site]

Principal works
1940. der Humanistische Rechfsstaatstheorieen [The Development of the Humanistic Theories of the Law-State] (Utrecht-Rotterdam, 1940), 752 pp

Language Works
1955. The philosophy of Vollenhoven and Dooyeweerd The Calvin Forum June/July p 219.

1971. Knowing. In Jerusalem and Athens: critical discussions on the theology and apologetics of Cornelius Van . E. R. Geehan, pp. 306-319.

1964. Introductory: the transcendental critique in the field of biology. Philosophia Reformata 29 pp 111-113.

1965. The transcendental critique in the field of biology. Introduction Duyvené de Wit. A New Critique of the Transformist Principle in Evolutionary Biology. Kampen, Kok. 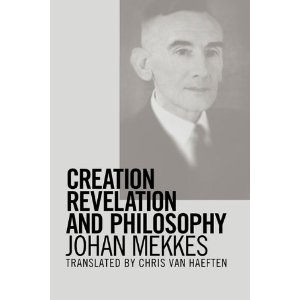